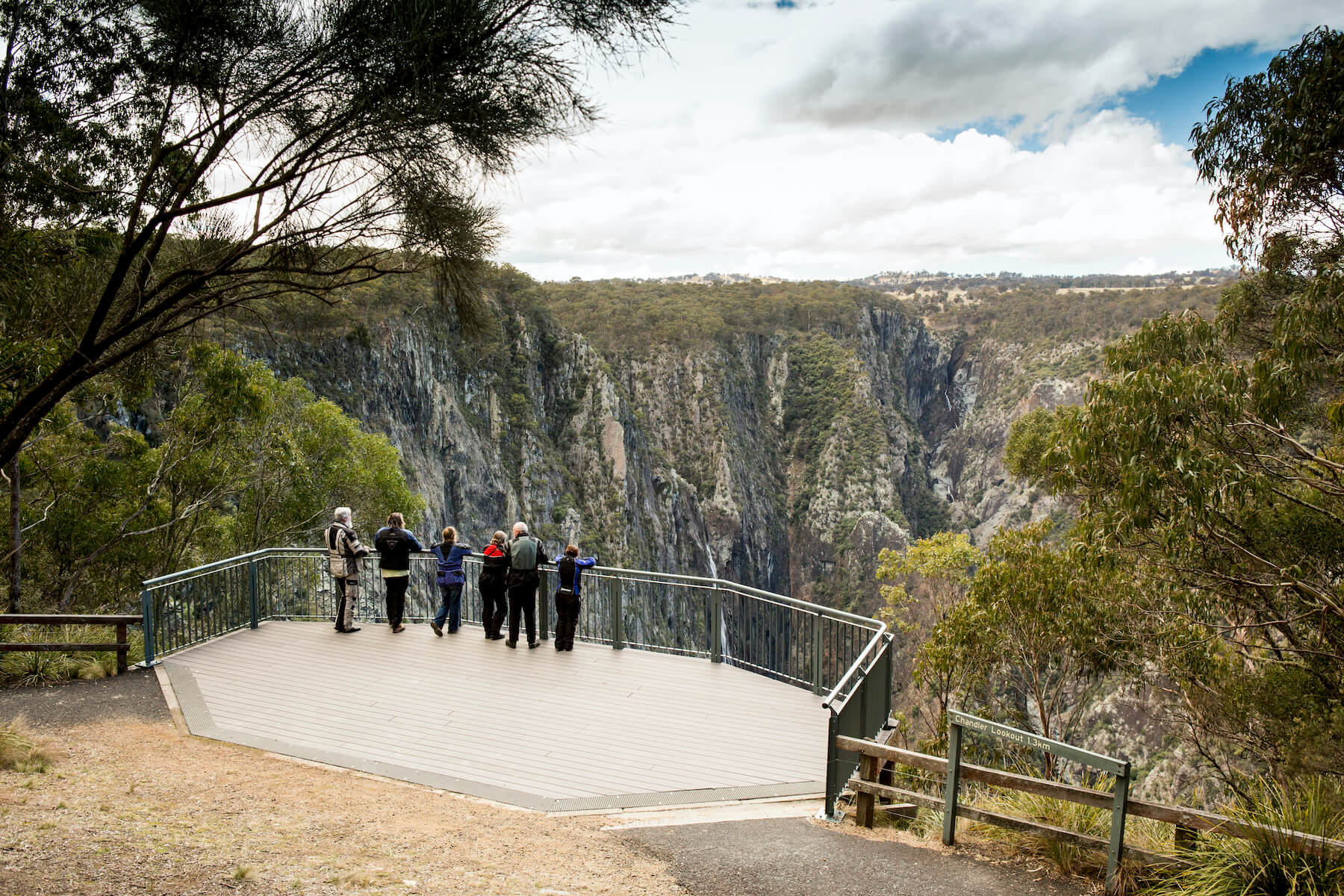 Vineyards – up there?” “Sure, plenty of them, and that’s where you’ll be staying each night.”

Just saying the word ‘vineyard’ means I’m a shot dog, but there were plenty of other reasons why I was interested in this trip. I have a long history with Armidale, including some years at the University of New England, and it’s always fascinating to revisit towns from your wild youth to see how the passing years have treated them.

Getting to Armidale absolutely confirms the cliché that the trip is just as important as the destination. From whichever direction you approach it, you have to climb.

From Sydney, the conventional route is through the Hunter Valley and up the New England Highway where the climb starts from Tamworth. But there are better routes. Thunderbolts Way out of Gloucester is fast and richly rewarding with scenery that makes you question whether you’re still in Australia.

Motorcycling’s worst-kept secret, the Oxley Highway from Port Macquarie, is a combination of more than 800 corners followed by a long section of fast sweepers and straights heading to Walcha. The road-less-travelled is Coffs Harbour to Armidale via Ebor and the aptly named Waterfall Way.

Coming from Queensland, the Bruxner Highway from Casino through Tenterfield where it links up with the New England Highway is also a riot of corners, but true adventurers would probably turn right at Grafton and take the Cobb & Co stage route along the Old Grafton Road (140km gravel road, conditions subject to weather events). If your bike is more of the touring persuasion, Grafton to Glen Innes along the Gwydir Highway is also richly rewarding.

Walcha was our first town stop once we’d reached the plateau. Again, the motorcycle-friendly Royal Café (a thinly disguised pub) made its siren song but, since we were on our way to a vineyard anyway, we resisted and dined instead at Café Graze, which proved beyond doubt that good coffee does exist outside of Melbourne. It also does excellent homemade pies in ramekins.

We walked it off afterwards on the town’s public art trail where around 50 works of art (one for every 75 residents) are featured. None of this is Big Banana stuff – it’s the real deal and impressed the proper artists in our group. Morley, Newbold and I were happy enough with the overtly pornographic nature of some of it but it led to some heated discussion. Morley settled matters by declaring, “I know everything about art, I just don’t know what I like.”

Merilba is a fine example of how pastoralists have endured in the area, with this historic property currently occupying 30,000 acres at Kingstown (slightly west of Uralla) and producing Merino fine wool and prime lamb. We didn’t visit for any of that though – it also has 27 acres under grapes, produces excellent wine and has one of the most interesting cellar door/restaurant buildings in the country, namely Merilba Estate Wines.

The six of us had separate dishes and ended up passing them around to be shared as the extensive use of local produce gives the menu great regional interest. I know it’s a mixed metaphor but I hogged the rabbit – you hardly ever see it on menus – and the crispy duck and a barley-based vegetarian dish were also exceptional.

Fred Ward, better known as Captain Thunderbolt, was a bushranger in the area in the 1860s, famous for escaping from Sydney’s Cockatoo Island and never having actually killed anyone, despite a 40-year career in crime. Plenty of people around him died, though. Thunderbolt’s Way is named after him, as is Thunderbolt’s Rock in Uralla.

McCrossin’s Mill tells most of the Thunderbolt story, including a series of paintings depicting his final hours. It’s a great museum, and the Thunderbolt story is reminiscent of Jesse James in that you get the impression that, in the end, he wasn’t trying too hard not to be shot.

Uralla has recently attracted a tree-change population shift from Sydney and its pubs, restaurants, book shops and art culture reflects this. It’s a very surprising town and worth a lot more than just a beer at the top pub.

The New England region has every right to identify itself as different from the rest of the country. Its sense of self was such that, in 1967, a referendum was held to make the New England region a separate state. Current maps would have Victoria, NSW, New England and Queensland as separate entities. The ALP pushed the no vote (mining and steel production in the Hunter Valley as opposed to agriculture everywhere else) and the proposal was defeated by a slim 54/44 margin.

Newcastle would probably have been the new state’s capital but Armidale was a serious contender.

These days, the town impresses for the architecture of its grand, 1800s buildings and the 1948 decision by the Armidale Improvement and Beautification Committee to plant 1500 trees in the township. The current council still commits to 100-150 new trees every year and the result is brilliant colours throughout the year.

Typical of the period charm of the buildings is Saumarez Homestead, located near Armidale’s airport, which is a 30-room Edwardian-era house with 15 other buildings attached, which were all required when the house was built to make it self-sufficient.

We stayed at another genius old house – Petersons Guesthouse. By an amazing coincidence, it happens to be a winery as well. The historic homestead, originally named ‘Palmerston’, was built in 1911 and while it has been recently restored, the giant ceilings and huge guest rooms were kept intact.

We used Petersons’ as a springboard for rides along the Waterfall Way to Ebor and back, calling in at various national parks for short walks to lookouts which revealed what the road suggests – waterfalls. The eastern escarpment of the Tablelands region has mind-boggling gorges and rainforests protected in around 25 national parks, three of them listed as world heritage areas by UNESCO, and most easily accessible for riders.

New England High Country has recognised motorcycle tourism as worth pursuing and it’s now probably the most motorcycle-friendly destination in the country, so get out there and discover it for yourself.